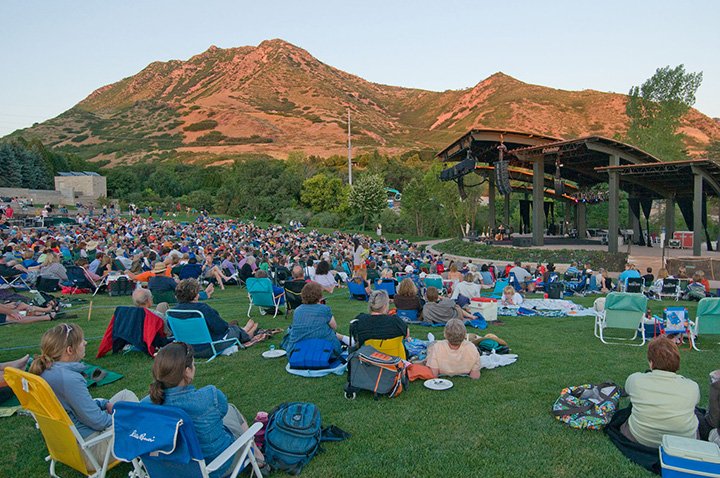 Utah’s continental climate lends itself perfectly to outdoor concerts, as warm summer nights and stunning mountain views provide a picturesque backdrop to any show. And with more than a dozen outdoor concert venues, long-running concert series, and new music festivals popping up every year, there’s hardly a week during the summer where there isn’t a handful of outdoor concerts in Utah to enjoy.

Whether you want to see the latest best-selling singers and songwriters, underground hip hop legends, full orchestras and symphonies, jazz and blues heroes, up-and-coming indie artists, local bands, or rock icons, Utah’s outdoor concert lineups have a little something for everyone. Here are our favorite outdoor concerts in Utah:

Strolling through Red Butte Garden is already a great way to spend a day, but it becomes even more amazing during long summer nights. Red Butte Garden features a wide-open outdoor lawn with open seating and massive stage nestled right into the foothills of the Wasatch Front. Every summer since 1987, Red Butte has put together a memorable concert lineup featuring a wide-range of artists and genres that cater to crowds of all demographics. It’s a total vibe. Red Butte Concerts are BYOB, so feel free to stock up that cooler with your favorite Utah beers and wine, and don’t forget to bring something tasty to eat. We love bringing in some of the Best Tacos in Salt Lake City from Taco Taco with a few Uinta Lime Pilsners. Simply put, it’s Utah’s best outdoor concert venue.

For outdoor concerts in Utah, nobody can touch The Twilight Concert Series in terms of value. For more than 30 years, The Twilight Concert Series in Salt Lake City has brought in the most exciting lineups for less than $10 a show. Originally hosted at the Gallivan Center, then at Pioneer Park, and now back at Gallivan, Twilight brings in the biggest names in music as headliners, and tomorrow’s biggest acts as openers. I can’t tell you how many huge artists I’ve seen at Twilight standing in the front row, right up next to the stage. I’ve also discovered many of my now-favorite artists at Twilight shows when I had no idea who they were coming in (hello, METZ).

With one show every week during the summer and a choice selection of food trucks, beer, and vendors, Twilight will quickly become your favorite part of the week. Also, everyone here argues about the best lineups. I personally stump for 2015, which featured Death Cab, Tune-Yards, Father John Misty, Black Rebel Motorcycle Club, PRhyme, The Kills, METZ, Run the Jewels, Flying Lotus, St. Vincent, and Best Coast… all in the same summer. Unreal. Also, does anyone remember that Wu-Tang show?

If you want to see the biggest names in music in an outdoor concert setting, look no further than the summer concerts at Usana Amphitheater. Since 2003, Usana has been Utah’s premier outdoor concert venue for major artists on their summer tours. With a seated area that has no bad views, a big open lawn for discounted tickets, and beautiful views of the Wasatch Mountains, Usana concerts should always be a part of any summer checklist.

Ogden Twilight may have started as the little sibling to Salt Lake City’s Twilight Concerts in 2015, but it has quickly become a destination of its own with fantastic lineups and Ogden’s natural charm. Ogden’s Historic 25th Street is walking distance from the venue with tasty eats, breweries, and bars for before and after Twilight fun. If you are in SLC and don’t want to drive, you can also use your Ogden Twilight ticket as a Frontrunner pass for free.

Situated just down I-15 from Salt Lake City is Utah’s most underrated outdoor concert venue. The Sandy Amphitheater (opened in 1999) has a laid-back, community vibe to it that’s perfect for summer, and features a diverse collection of artists from every era. And as of 2019, that laid-back vibe got even more laid-back as the venue announced they will begin selling beer and wine.

Utah County’s best outdoor concert series is the Provo Rooftop Concert Series. The series began in 2010 to support the vibrant Provo music scene, and for the first 5 years it was actually hosted on a rooftop until it became so popular that it had to move down to the street level (but held onto the name). The Rooftop Concert Series is hosted the first Friday of every month during the summer, and it’s completely free.

Since 2017, the LOVELOUD Festival, founded by Provo’s own Dan Reynolds from Imagine Dragons, has brought in big name artists to raise money for important LGBTQ+ charities and organizations including the Trevor Project, GLAAD, The Human Rights Campaign, Tegan and Sara Foundation, Encircle, and more.

Crucialfest is a multi-day music festival in and all-around Salt Lake City. This isn’t your radio-friendly festival, and it should be in contention for SLC’s best music festival. What makes Crucialfest special is it focuses on collecting metal, punk, post-hardcore, thrash, sludge, psych, and underground hip-hop bands, as well as SLC’s homegrown talent (check out The Nods, Brain Bagz, Sunsleeper, and Westing PLEASE) and putting them all on the same bill.

The Salt City Sounds Concert Series is hosted at the Gallivan Center and features lineups with mostly hip-hop, electronic, and EDM artists.

Every year, the Utah State Fair puts on fun, family-friendly concerts with artists like Kansas, Foreigner, 3 Doors Down, Collective Soul, Blue Oyster Cult, and more. Plus, you get to eat all that delicious fair food. Sounds like a huge win.

Believe it or not, Utah has a rich history of hosting traveling blues musicians including the likes BB King, Muddy Waters, James Cotton, and more. Since 2015, the Utah Blues Festival at the Gallivan Center has brought in top national blues musicians for a multi-day experience that also includes fun workshops like cigar box guitar making classes, food vendors, and youth showcases.

The Rio Grande Concert Series is held weekly at the Olympic Plaza at the Gateway Mall in the month of May. These free concerts are a great way to spend an early summer evening and feature live music, food trucks, and craft beer and cocktails.