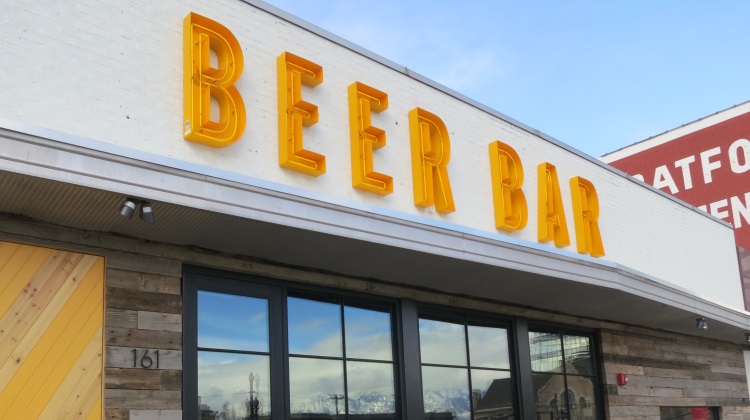 “Take car. Go to mum’s. Kill Phil, grab Liz, go to the Winchester, have a nice cold pint, and wait for all of this to blow over.”

Cheers for the beers! Contrary to the opinion of the Golden State Warriors, Salt Lake City’s nightlife is booming with bars, pubs, and breweries popping up all around Downtown and the surrounding areas. The next time the Jazz beat them 30, I hope they check out our Best Bars in Salt Lake City list.

We know. Utah has some of the most bizarre liquor laws in the country, but that doesn’t stop us from having a great time in this city. Maybe it’s from the creativity required to operate within the liquor laws, or just out of pure spite of SLC’s counter-culture, but Salt Lake City’s bar scene is eclectic, unique, and full of life.

If you are looking for a gauntlet of bars, Main Street and 200 South are going to be your best bet for walkability between establishments. Are you are feeling confident in yourself and have a full day to kill? I suggest you attempt to tackle Salt Plate City’s Mormon Mile Bar Crawl. 12 bars. 12 pints. 1 mile.

Quick notes to all of the out-of-towners:

With that out of the way, here is our list of the Best Bars in Salt Lake City.

Didn’t see your favorite SLC bar? We are always updating this list, so tell us which bar we need to check out next in the comments!

Alibi may have just opened in the latter part of 2018, but it has quickly become one of the Best Bars in Downtown Salt Lake City. SLC is constantly growing, sometimes at the expense of our character. But Alibi’s location and aesthetic reminds us where the city has been and shows us where we are going. Sitting near the South-end of Main Street, this bar just oozes cool, from the views of Downtown SLC outside the huge front windows to the interior brick and hanging plants.

It isn’t a hipster bar, or a Yuppie bar – Alibi is a bar for Salt Lake and provides a little something for everyone to feel welcome, and that is its identity. At Alibi, you’ll find craft cocktails like the refreshing Roller Derby with gin, lime, and raspberry – or the spicy Paloma with tequila, lime, Jarritos, and spicy salt around the rim. They also feature a rotating list of local and out-of-state craft brews on draft. Be sure to give them a follow on Instagram to keep up to date with their latest events, DJ sets, and late-night dance parties.

Purgatory is my everything. I’ve spent more time at Purgatory than any other bar in Salt Lake City, and its because there is so much variety. This is the bar I take all of my out-of-town friends because it has a little bit of something for everyone. For those long summer nights, get yourself a seat on their huge outdoor patio, or next to one of the wide-open garage doors that mark the separation between the patio. Though Purgatory always has a good-sized crowd, I’ve never had trouble finding an open seat at the bar or an open table. This bar is DEEP. It just keeps going farther and farther back. In the way-way back you’ll find corn hole, a huge Connect Four setup, and the ever-trendy Giant Jenga.

The cocktail and beer lists at Purgatory are extensive, so expect a huge variety of options to choose from. They have a huge selection of local beers on draft as well as a bunch of bottle options if you want something high-point. Cocktail highlights include the Hibiscus Mule, the White Russian Hacks with Coco Puffs, and the Smokey Loma made with mezcal, tequila, and smokey agave. The cocktail menu is extensive and has a little something for everyone whether you want a traditional cocktail, something fancy, something unique and sweet, or something a little more complex.

I’m burying the lede here. Purgatory’s food is the best bar food in SLC. Purgatory is owned by the Sapa Group, and if you’ve ever been to one of their restaurants, expect more of the same quality and attention to their food menu. Try their unique bar offerings, like the Pork Belly Nigiri, or dive into one or three of their Bao Buns. I can’t not mention their huge collection of fry plates, including the K-Pop Fries with braised beef short rib and kimchi, and the Buffalo Fries with housemade buffalo sauce and slaw.

You’ll also find Purgatory on our Best Burgers in SLC list because of our favorites like the Purgs Burg with caramelized onion, the Eastern Burger with pork belly, kimchi, and a fried egg on top, and even the Beyond Vegan Burger which they cook to perfection.

On the weekends, you could honestly stay at Purgatory the whole day because their brunch is the best way to start your day. They have brunch drink favorites like mimosas, bloody marys, beermosas, and beer marys, but also have incredible brunch dishes like the Sunrise Burger, Buffalo Chicken Toast, and appropriately named Baby Arm Burrito.

Forgive me for using this word, but the bartenders at Water Witch are cocktail artisans. This place is tight – and I mean that using a few definitions. This place is small but so cool. It’s the neighborhood bar for the newest generation. It’s like if Cheers was a neck tattoo.

As far as suggested cocktails, Water Witch switches up their menus so quickly that by the time you are reading this they will have completely shifted their offerings. That just means you need to go now and go again and again after that. They won’t like me suggesting this, but many times I’ll avoid the menu, name a liquor, and just ask them to go crazy.

And oh man, do they pick great tunes. To the left of the bar you’ll find them spinning anything from Frank Zappa and the Beatles to the entire discography of Ty Segall.

My girlfriend also insists I tell you that their bartenders are hot. So. 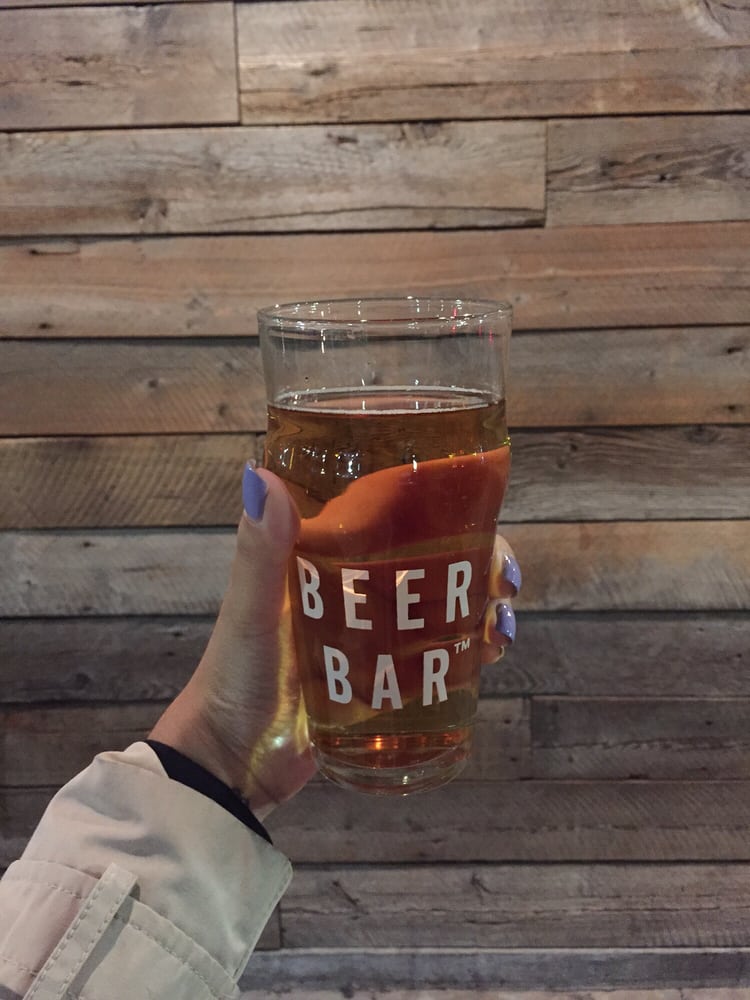 If you want beer, Beer Bar is your place. Great name too. You have to love an appropriately named bar. Beer Bar’s tap list and bottle offerings could be considered the best in the city depending on which beer enthusiast you talk too. With huge beer hall-style tables, you will almost always find a great seat for you and your crew.

If you are wondering about food, Beer Bar’s chef is Viet Pham, an Iron Chef champion and one of Salt Lake City’s most celebrated chefs behind classics like Forage and the new Pretty Bird chicken sandwich shop. On Beer Bar’s menu, you’ll find more bratwurst and sausage options than anywhere else in SLC, as well as french fries which they artfully describe as, “Really, really good.”

Oh yeah, and Beer Bar is partially owned by Modern Family’s Ty Burrell, and he is known to hang around and chat with fans especially when his Oregon Ducks are playing.

Under Current is the cleverly named sister-bar to Current Fish & Oyster and is conveniently located next door in the Central City area. This sleek, modern bar is upscale and classy without feeling stuffy and elitist. Order yourself a speciality cocktail like the fruity Painkiller or the smooth Mexican Firing Squad, an order of daily oyster shooters, and discuss the folly of trickle-down economics. Mmm, yes, quite.

This one’s for the Pinball Wizards. Utah finally got a Dave & Busters and it’s already the 2nd Best Arcade Bar in Salt Lake City because Quarters Arcade Bar is the arcade bar Salt Lake City deserves (and you can actually take your drinks to the game cabinets, unlike D&B). Along with great cocktail names like The Hulk Smash and Crush Bandicoot, and a huge list of beers, Quarters Arcade Bar has a massive selection of classic arcade cabinets, a seemingly endless row of pinball machines, dozens of the best board games, and highly sought-after modern multiplayer games like Killer Queen.

If you’re the type of person that orders cocktails with non-well spirits, White Horse is your place. The first thing you’ll notice walking into this place is the wall of spirits going all the way to the ceiling with just about every variety of liquor you can imagine. For food, I can highly recommend their Patty Melt Sandwich, the Oyster Shooters, and what I consider the absolute Best Fried Brussel Sprouts in the State, which contain pork belly lardons and roasted peanuts, are drowned in soy bonito broth, and covered in their spicy mayo dynamite sauce.

Ivy (and it’s down-the-block cocktail bar sister, Varley) have breathed new life into Downtown SLC’s bar scene, and also into one of the best patios in SLC. In the old Caffé Molise space on 100 S, Ivy & Varley has created a hip, chic bar with an approachable atmosphere, delightful crafted cocktails, and a food menu that takes a giant leap past your perception bar food. And if starting your weekend starts with a mimosa, definitely check out their boozy bar brunch.

One of the bars in SLC with a beer list that might top Beer Bar is the classic Beerhive Pub on Main Street. Beerhive is your classic English-style pub with dark wood shelves, a seemingly endless beer list, and a bar top ice strip to keep your brew ice cold. They also have one of the best shaded Main Street patios in the Summer for people watching or catching up with friends.

My go-to date night is heading to Copper Common, grabbing a drink or three on their street-side patio, devouring the Copper Burger (which we ranked the Best Burger in Salt Lake City), and then watching an independent film at The Broadway. Copper Common is next to Copper Onion and shares the same kitchen. So when you order the Copper Burger or Margerhita Pizza, you are getting the same dish you would get over there. They also have a great selection of local Utah beers and a rotating list of craft cocktails that’ll keep you going through even the most pretentious of cinema.

Named after what makes the Greatest Snow on Earth so great, Lake Effect is a modern-industrial style craft cocktail bar directly across from the Salt Palace Convention Center in Downtown SLC. While Lake Effect will serve you a cocktail like you’ve never seen in SLC, they also have a multi-page beer list that is sure to impress. This bar is a great place to network after an industry convention or just to listen to live music and dance with friends on the weekend. Check their event calendar as well and book a reservation for one of their Whiskey Tasting Events.

Post Office Place is quickly becoming one of our favorite bars in Downtown Salt Lake City. Not just because it is next door to one of the Best Sushi Restaurants in SLC (Takashi) and you can get a delicious Fried Spam Slider as an appetizer while you wait for your table, but that is a big reason. Post Office Space holds it’s own with unique cocktails, and a large selection of spirits and brews in a central SLC location.

Diners, Drive-Ins, and Dives in Utah